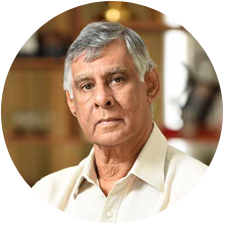 I was at a cross roads in my career wanting something different, something more challenging and then I stumbled on this opportunity of a job where the terrain was unfamiliar. I was young and the challenge excited me and there I was from a structured , hierarchical environment in an organization bustling with energy generated by an impatient but passionate entrepreneur.

I had , in my 30 years of association more than my share of everything I aspired for and must admit that I kind of enjoyed it and would have it no other way .

There were some significant attributes that made his journey , one of great success . His passion and belief in his chosen product and that being TEA .His in-depth knowledge of everything that surrounds it ,be it growing , manufacture , processing , marketing etc . He was a one stop shop ! His disapproval of the exploitation of the industry by the multi nationals drove him to great lengths to eke out a fair deal both for the industry and for the country . His coinage of the brand name DILMAH which is a combination of the names of his two sons , I feel was also a driving force , for it was very personal and meaningful . Sometimes I wondered whether DILMAH took precedence over everything else . An unfair thought though ! His passion for quality was that DILMAH should deliver nothing short of the best in every aspect of the business . The slogan Customer is King was not mere rhetoric but practiced in every sense. He was always conscious that his most important asset were the minds and hearts of those who worked for him and the well being of their families which received his personal attention . In a world of tempting choices he practices the moral obligation of a Corporate towards society by making

lasting humanitarian contributions to society via the MJF Charitable Foundation and MJF Conservation by pledging 15% of profit before tax of all group companies . In a society where such meritorious acts receive much publicity and attention these institutions render a quiet but useful contribution mainly to the differently abled and the under privileged . When historians get to work Merrill J Fernando will feature as the person who pioneered the tea bag industry in Sri Lanka. With DILMAH present in over 100 countries in
the world , the imprint that DILMAH has made on the people of these nations is unmatched in terms of popularizing Ceylon Tea and making Sri Lanka known as a nation in the world at large. All of these significant trailblazing achievements did not come easily . It meant long hours at the office , unwavering determination , plenty of sacrifices , many disappointments , self belief and the will to succeed against all odds locally or internationally .

As he celebrates his 90th birthday he should be happy that the next generation is firmly in place and more than capable of building on his legacy and taking DILMAH the love of his life to greater heights . So all is not in vain ! From now on it is all about good health and enjoying the grandchildren which is my fervent wish for you on this milestone birthday . Thank you for the good times ! you made it all happen .