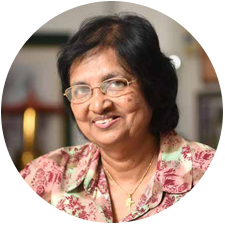 I don’t listen to my Accountants – if I did I won’t be where I am today” – Merrill J Fernando. In the year 2000, when I first met Mr. Fernando, he made this statement. I was worried that I had given up my organized, well receptive multi national world for a Group of Companies where the Chairman gave scant regard for the professional opinion and information from its Finance Professionals.

After 20 years, I am still associated with the MJF Group and have found out that the Chairman not only solicits information and views from his “Accountants”, but also studies these views carefully. Of course, at the end of the day – he calls the shots – but based on information provided. I am glad I made the move to the MJF Group in the year 2000, since it widened my scope and thinking.

Sometime back, I did an analysis of the various statements Mr. Fernando had made in the Annual report of Dilmah Ceylon Tea Company PLC (then Ceylon Tea Services PLC) from its inception, and it is fascinating to see how his predictions have come true. He predicted the negative impact of price warfare in tea exports, not establishing Sri Lankan tea Brands, supplying tea and not marketing tea, lack of a marketing plan for Ceylon Tea, continual export of bulk tea and not moving to value added tea.

Mr. Fernando faces challenges head on and has gone on to invest considerable amounts of money in building the brand, moving into value added tea and setting up state of the art factories. It is commendable that this was done without borrowing funds but by reinvesting earnings of the Company. To him, ROI, PAT, EPS, Share price etc were of little importance. He used to mention that we should look after the cents and the rupees will look after themselves. This was amplified when he went into the purchase price of even the tag used intea bags.

Mr. Fernando always “thinks outside the box” and encourages all his staff and associates to do so. His efforts in the plantation sector of Sri Lanka are commendable. If all his ideas were implemented, the Plantation sector would not face the challenges now faced by it.

Whilst being an astute businessman, Mr. Fernando never ceases to be a generous human being. He lives his Motto “Business is a Matter of Human Service”. His charitable deeds are well known and he would also look at the human needs of those he interacts with. From looking after the welfare of his employees to establishing the MJF Charitable Foundation he walks the talk. Mr. Fernando’s example of generosity has inspired a similar spiritin all those around him.

Mr. Fernando is an icon in the tea industry and has deserved the accolades he has received. I take this opportunity to wish Mr. Fernando God’s choicest Blessings.