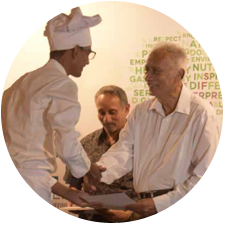 The Foundation has done some unbelievable things, he had earlier built a hospital in Kayts and last year was building a new wing for the hospital in Point Pedro and since he was travelling, without delaying the project wanted me cut the first soil to enable the building work to continue. At the same time, we also did the same for a new building which he was constructing in Point Pedro on Anpuellam which was a unit run by the Roman Catholic church for students of any religion whose parents had to go to work and did not want the children to be left behind alone at home. They come in there and studies are supervised, meals provided until their parents pick them up in the evenings. On that trip we also went to the Deaf and Blind school in Kaithady where he was donating valuable equipment for vocational training. I was privileged to do the honours on his behalf. The work of the Foundation is well known around the country and I will not dwell on it. I wish to conclude by stating that I feel part of the Dilmah family, due to the kindness and consideration shown to me by the organization. May God continue to bless Mr. Merrill Fernando and give him many more years of good health. I always remember his favourite saying “We come into this world with nothing, and we leave this world with nothing. So let us do what we can during our sojourn here”.