Coeur a la crème with Red Rooibos with Raspberry and Coconut 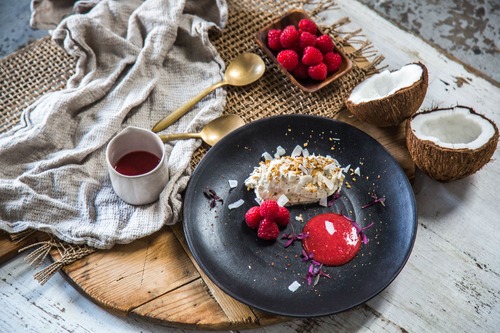 Coeur a la crème with Red Rooibos with Raspberry and Coconut

Beat the egg whites and cream of tartar to stiff peaks. Add one-third of the sugar and continue beating until smooth.

Lightly whip the cream in a separate bowl.

In a third bowl whisk the quark with another third of the sugar and one-third of the lemon juice. Fold in the whipped cream, then gently fold in the beaten egg whites. And the one tea bag of Red Rooibos with Raspberry and coconut removed from the bag

Place a heart-shaped mould on a tray. Line the mould with damp muslin cloth, then fill with the cream mixture. Cover with the muslin and drain in the refrigerator for at least 4–5 hours or overnight.

Place the raspberries, 2/3 sugar, lemon juice, orange juice and Red Rooibos with Raspberry and coconut tea bags into a heavy based pot and bring to the boil. Remove from heat and allow to steep for 5 minutes before removing the tea bags and pureeing the raspberries. Set aside to cool. Chill in the refrigerator.

Carefully turn the heart out onto a serving plate. Top whole raspberries and dust with icing sugar. Serve with the raspberry sauce.