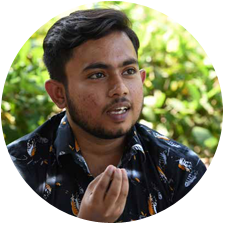 I knew I was finally getting there when I made people laugh, cry and think through my performances.

It was at MJF Centre Moratuwa that I experienced my artistic awakening. When I joined the MJF Kids Programme, I was an extremely shy, socially awkward 11-year-old who was reluctant to come forward. Little did I know that was destined to be on stage.

8 years ago, Miss Sulochana - got me involved in a puppet drama based on a famous folk story. It took me by a surprise when she selected me to play the lead role. For the first time, I was given the chance in life to escape my fears and insecurities and I was finally able to prove my worth to people through my talent.

From that moment onwards, I went on to perform in school plays, stage dramas, flourishing as an actor and performer. With experience came an interest in me to write scripts, produce and direct plays. ‘Shooting Ivarai’ is the first-ever stage drama I directed with the support of my friend Asela and fellow MJF scouts. The drama won the first place at the Scout Jamboree in 2016. Last year, for World Suicide Prevention Day, I got the opportunity to be a part of another MJF production by Lucky Deva Sir. I played the role of a young depressed boy who was on the verge of taking his life. The story deals with his hallucinatory encounter with the Demon of Death. The drama made a powerful impact on the audience, bringing tears to their eyes. Moments like this make it all worthwhile. I knew I was finally
getting there when I made people laugh, cry and think through my performances.

Acting is a craft that takes much passion, ambition and devotion to thought. Over the years, I have played different roles on-screen and on stage, trying to explore my strengths as a storyteller, actor and entertainer. The learning never stops. As an artist, I am in continuous pursuit of being better at my craft. I am eternally grateful to Merrill J. Fernando for opening the imaginations of many
aspiring actors and filmmakers like myself.

"I knew I was finally getting there when I made people laugh, cry and think through my performances."