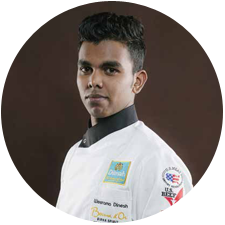 I lost my father at a very young age. It was my mother - who is a plantation worker at Dilmah’s Rilhena Estate, raised me and my brother. Growing up, we had a life full of hardships. There were days we barely had enough money to eat.

I was never a studious person at school. After O/L, I dropped out and thought of finding a job. In 2016, I got to know about Dilmah’s newly- opened Empower Culinary & Hospitality School (ECHS).

The idea of continuing a career in the culinary and hospitality industry caught my interest. I applied and got selected to the ECHS’s first-ever culinary boot camp in Moratuwa. Upon my graduation, I started my apprentice and gradually got promoted to a Commis Chef - working in some of the wellknown hospitality establishments in Sri Lanka. Subsequently, I also supported Chef Chamalka in Bocuse d’Or Sri Lanka 2017 and managed to impress the judges with our culinary craftsmanship at the live cooking session.

I consider it one of my biggest accomplishments to have represented a team that won the Gold Medal in a contest that is widely regarded as the Culinary Olympics.

Dilmah’s Empower Culinary & Hospitality School gave me the foundation I needed to become a great success by opening up opportunities for me to learn skills that I never would have been able to afford on my own. At ECHS, I was able to find my true passion in culinary arts and work with eminent chefs - some of whom are truly the best in the world at what they do.

Thanks to Merrill J. Fernando & Dilmah Family I have reached heights and touched depths that were once only dreams and wishes. I never thought I would have a future with promising career prospects, especially at such a young age.