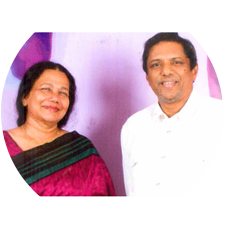 his twin passions: engaging with plantation workers and hundreds of differentlyabled children.

Tribute to Merrill J. Fernando
All our conversations with Merrill have been enriching, absorbing and an insight into humility, selfless social service and duty to man and nature.

Be it Katubedda in Moratuwa, Kalkudah in Batticaloa or elsewhere, when we meet Merrill at MJF Charitable Foundation events, his engagement with villagers or the less-privileged has always generated admiration.

Merrill’s humility towards anyone who ‘crosses’ his path and his passion to uplift those in need are legendary………the very basis on which he has built his tea business with the philosophy: ‘Business is a matter of human service.’ Feizal: Merrill’s best times, as he always says, are spent with children with disabilities and differently-abled. I remember a conversation at an MJF Charitable Foundation event at Moratuwa when a differently-abled young man greeted Merrill with joy and affection. Having been given the task of bakery manager, the young man was asked what his greatest goal would be. Pat came the answer, “To sit in your chair.” This drew much laughter from Merrill who responded “that is a noble goal”.

Merrill once told me that he is not “overly religious but owes my success to God”. Another important quote from him is: “We enter this world with nothing and we exit this world with nothing. The wealth that some of us acquire is with the help of many others. Let’s share some of that wealth in making others happy.” A life-changing incident explained by him in an interview with me was when he was in hospital after a serious motor accident many years ago, where the car was a total wreck, “Selvanathan, father of Hari and Mano (who own Sri Krishna Corp and Carsons) came to the hospital and told me, ‘Merrill, it’s a miracle you are alive. Therefore, when you get well
you must offer your life to the Lord and work for the Lord’.” That probably was the beginning of his journey in serving mankind. Merrill once told me in January 2018 that he wanted to spend more time with friends and his twin passions: engaging with plantation workers and hundreds of differently-abled children. While he has divested many of the operations of Dilmah to his sons – Malik and Dilhan –, due to his “many friends and associates in those countries wanting me to be present at these events”, his work continues which involves many trips abroad to open new Dilmah centres and tea boutiques.

Whether Merrill slows down his hectic schedule when reaching a fruitful 90 years remains to be seen. My inner instinct however tells me that even if he does not visit the boardroom as often as he did, he is sure to be a regular presence among all those children whose lives have changed for the better because of him. Kumudini: Years ago, after attending the Christmas party that the MJF Charitable Foundation hosts for its ‘family’ – all those children and youth who have come under their shelter – when I offered to write a piece for the newspaper, there was much reluctance.

To me, it was a far cry from the norm where many things are done for the needy, to get as much publicity as possible for the doer. That was the day, Merrill and his family won me over to become an ardent supporter of the good but silent work that they do for numerous men, women and children. Merrill’s heart is very much in this service and it is obvious that it’s not just a case of doling out money. As Merrill’s 90th birthday approaches, my wish is that God showers His choicest blessings on him

That was the day, Merrill and his family won me over to become an ardent supporter of the good but silent work that they do for numerous men, women and children.

his twin passions: engaging with plantation workers and hundreds of differentlyabled children.