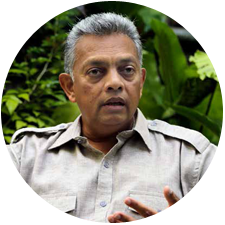 His vision led to Dilmah Conservation partnering with other conservation organizations and academic and research institutions in promoting environmental sustainability in Sri Lanka. In 2010, Dilmah made a Declaration of a Core Commitment to Sustainability and carbon neutrality, being among the first in the corporate sector in the country to do so. As a member of the Technical Advisory Panel for Dilmah Conservation, it was a privilege to be a part of Mr. Merrill J. Fernando and his son Dilhan’s efforts to use Dilmah Conservation funding to leverage ethnic reconciliation by using nature as a catalyst, which is a unique way toaddress a complex problem.

While numerous environmental and conservation initiatives have been funded by Dilmah Conservation, their activities closest to my heart are their active involvement in elephant conservation initiatives at the Elephant Transit Home (ETH) in Udawalawe National Park through funding the renovation of the ETH in 2011 and funding the maintenance a dedicated Information Centre designed to create awareness and share vital information on elephants. Dilmah has also partnered with the Department of Wildlife Conservation and the Centre for Conservation and Research in radio-collaring two elephants at the Yala National Park to study the movement patterns of elephants. They have also supported the publication of numerous books on various aspects of biodiversity in an attempt to disseminate information and create awareness of the importance of biodiversity and environmental sustainability.

But I believe that Mr. Merrill J. Fernando’s greatest contribution to sustainability in Sri Lanka is Dilmah Conservation’s One Earth Center for Climate Change Research and Adaptation. Sri Lanka, as an island is particularly susceptible to the impacts of climate change. Irreversible changes to ecosystems are already visible in many parts of the country, but there is very being done by us as a country to prepare ourselves for climate vulnerabilities. There is a dearth of scientific knowledge on climate change adaptation and mitigation options in Sri Lanka, and in the absence of the state taking the initiative to address this, Dilmah Conservation has established Sri Lanka’s first climate change research station at Dilmah Tea’s Queensbury Estate in Nawalapitiya. Through this center, Dilmah hopes to create a selfsustaining institution that will utilize clean energy, environmentally friendly water treatment, and contribute to biodiversity enrichment, and public education and awareness. As a conservationist, I feel that this timely initiative by Mr. Merrill J. Fernando will have the greatest impact on sustainability.